The Big Picture For Wildlife “Let us not forget about the state of affairs for wildlife in Australia, even under the current, unprecedented pressure of Coronavirus.”

After the fires, there’s nowhere to hide

The recent (only just over a month ago, were the last fires officially out) bushfire catastrophe has started a conversation that could, if given the weight it deserves, drive positive change for wildlife in Australia. The sheer scale of wildlife killed over the past summer (one billion plus mammals alone, and counting) has eroded the pre-existing buffer, if we can be so crass as to call it that, and further wildlife deaths now appear intolerable. The once numbly ignored facts regarding wildlife casualties on roads, from shootings (legal and illegal), poisoning, and habitat loss, are now thankfully prompting questions about the big picture for wildlife in Australia. How can this previously muted and quietly accepted loss of wildlife now be justified, when so much is gone forever? An estimated 113 species now require urgent attention in the wake of the fires; can we continue with any activities that put further pressure on populations? Is this not gross negligence that should be apparent to all? One thing is undeniable: this is fertile ground for difficult conversations to truly happen, let’s hope they are loud, honest and relentless.

Each of the groups that Together For Wildlife (T4W) supports, face unique challenges, their own set of ongoing pressures impacting the species whose future they are working to protect. A few examples:

Animalia Wildlife Shelter – Koalas – Already qualifying for ‘threatened’ status in numerous locations due to loss of habitat and drought, they have been lost in unprecedented numbers over the past summer. It is estimated that 10,000 were killed in NSW alone (or as much as 70% of populations), and they are still dying of burn related injuries, stress and starvation. Animalia have been rehabilitating Koalas for many years, they come into care for many reasons such as road accidents, drought stress and starvation due to loss of habitat.

Major’s Creek Wombat Refuge – wombats –  Bill and Leslie rehabilitate wombats who have suffered trauma in a number of ways – orphaned, shot for fun, shot by private landowners who hold a license to harm, impacted by mange, impacted by drought, impacted by floods, killed in numbers on our roads that are horrifying. This is the list that existed before, and still exists after, the bushfires of the past summer that further killed so many wombats. Leslie from Majors Creek Wombat Refuge tends to a wombat after the devastating fires of later 2019 and early 2020 near Canberra and Bateman’s Bay, NSW

Friends of Leadbeater’s Possum – Leadbeater’s Possum –  This species lost 40% of its remaining habitat in the 2009 Black Saturday fires, they are critically endangered (yes, one step from extinction) and their sole remaining areas of habitat are still inadequately protected. The IUCN listed, critically-endangered ecosystems that are their home, are still being logged by the state of Victoria.

Eagle’s Nest Wildlife Hospital – you name it! – Road trauma and 1080 poisoning are Harry’s biggest issues, in his 30 years of service to wildlife in the far north of Queensland he has seen significant reductions in populations across all species, snakes, kangaroos, dingoes, raptors, and he attributes it to an ongoing, and relentless, campaign of 1080 baiting in his area.

These pre-existing pressures have not gone away, they will continue until WE decide to find new and creative ways to remove them, permanently.

The situation for wildlife in Australia is a balancing act

Globally, there has been an unprecedented influx of care, financial support and compassion for wildlife impacted by the catastrophic bushfires. We have been touched to see Koala mittens from the Netherlands, vets from New Zealand, joey pouches from American crafters; volunteers from all around the globe joining those at home in offering whatever they could to the wildlife recovery. These actions, when joined with the resources spent on the rescue and rehabilitation of burned survivors (weeks, if not months, of the daily changing of bandages, treatment for infections, careful monitoring after smoke inhalation etc etc…) have created an incredible surge for the benefit of our wildlife. Sadly, this influx is more than offset by long-term, big-picture pressures on wildlife. All of this care is only held in one hand; in the other is everything that causes wildlife to be killed in this country. Which way will the balance tip? Until the big picture pressures are fundamentally addressed, even with the bushfire wildlife recovery being so committedly undertaken by so many individuals and organisations, for many species it is still sitting heavily on the side that leads eventually to extinction. The Big Picture For Wildlife

Saying no to anything that harms wildlife, should now be a line in the sand

The full recovery for Wildlife cannot move forward without a broad discussion regarding the many ways that we continually allow the loss of wildlife, outside of the impacts of bushfire. Until that happens, we must at least acknowledge that we are only looking at only half of the big picture recovery post bushfires, and that any conclusions / solutions can then only be half of what they would be otherwise. We will only be doing half of the immense task of preserving our wildlife’s future. Until such a time that is, when we draw a line in the sand and adapt to a future where wildlife as collateral damage, under any circumstances, is simply unacceptable. This is the future that we’re adding our voice and energies to, join with us and let’s build a vanguard of help for wildlife. 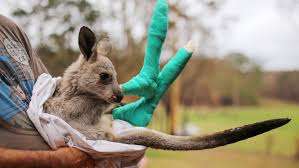 A kangroo joey in bandages and the arms of a carer A young kangaroo during the Australian bushfires of 2019-2020